I met Giants in the City’s curator Alejandro Mendoza back in 2013. His concept was to make monumental sculptures to share art in public places such as parks and squares. When we sat down and discussed what shape my giant should take, founder Alejandro Mendoza envisioned two typically feminine accessories : a giant lipstick or a giant purse. I chose the purse for its round plump shape but also for its symbolic value. As Erykah Badu’s Bag Lady, I wanted my purse to be giant but as light as air. ‘Pursing Lips’ is a pun on the

word purse and the phrase ‘to purse one’s lips’, which means to put your lips in a round shape, to blow a kiss or a candle. Pursing lip breathing is also a technique used to relax by blowing air through the lips. One side of my giant has pursed round  lips and the other one is blowing air. It represents how we all can strive to live lightly no matter how big our past luggage is. Since its creation, my giant has been exhibited at Key West Arts Festival, Art Basel downtown Miami twice and Palm Beach Spring Art Festival and Miami Dade Campus. It goes with 2 matching paintings that were shown in galleries at the same times as the outdoor shows. 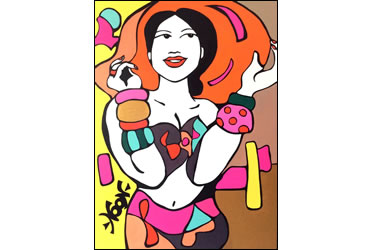 No Art Works in the cart.